When updating RecipeFolder from a PhoneGap/Cordova hybrid to a Native Java app I initially experienced a euphoria on how quick it was to develop in Android now. 6 months in, and still without having actually shipped the update that euphoria is long gone. Like any development finishing the last 10% takes 90% of the time, and it has been mostly done for about 5 months now. When I was initially planning on releasing the app (5 months ago), I planned to not add any features and just go with a cleaner look (an approach which abandoned since this would be the second time a rewrote the app basically from scratch to add no functionality so the release languishes while I add more and more features) I realized that it would disrespectful to the users to lose all their preferences and force them to login again.

I figured that since the users preferences was stored in localStorage there must be a way to retrieve them in my Native App. Knowing that WebKit (Chrome or the Android Browser) stores all of its localStorage data in a SqlLite database, I realized that it must be possible to somehow import the preferences from the PhoneGap version of my app. Since it took a bit of work, messing around, and trial and error to get it working right, I thought I might share the results with my readers and might provide some insight and potentially help if you too, dear reader, decide to ever port from Phonegap/Cordova app to a Native App. Discovering the technique, I have now also used it to read and write preferences in a background service for a PhoneGap app.

The localStorage database is located in /data/data/com.yourphonegap.name/app_webview/Local Storage/file__0.localstorage. To get access to it the easiest way is through Android Device Monitor (if the device is rooted and you can access /data/data from the file explorer): 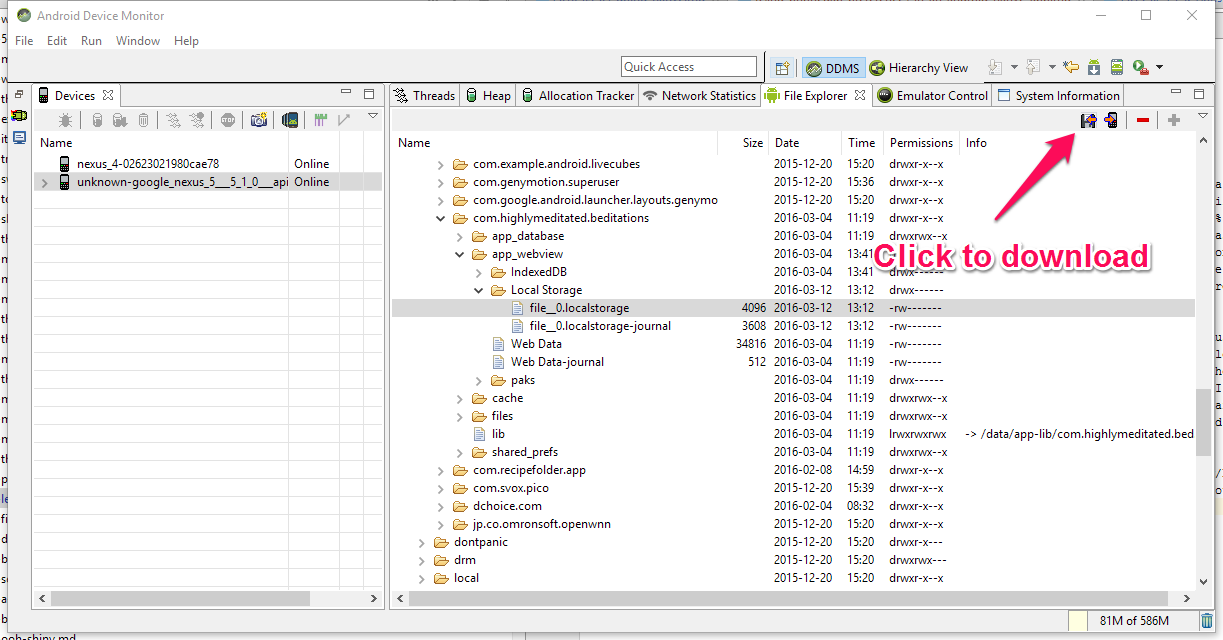 If you don’t have access to root, you can get the file through adb:

Now use your favorite SQLite Browser to open the database. You are going to see one table (ItemTable), with two columns (key and value). Now the values you see are going to be a little hard to decipher as they are UTF-16 encoded blobs, but it is nice to at least have a look and see that what we are looking at is a relatively normal SqLite database. Now lets look at the code to get values from our table:

And that’s it. Now you can read all the localStorage you want from your old PhoneGap apps either as part of a hybrid approach mobile development or if you are switching to a native android App from a PhoneGap app for whatever reason. Hopefully you find this useful, or at least a little educational.

This also can be done in iOS, but I haven’t started the iOS port of RecipeFolder yet, so I if it presents the same kind of issues I had when grabbing it on Android I might write an article for that as well.