… Or Embracing the Suck

I’ve had a Yahoo Mail account for almost 15 years, at the time I got it it was basically for travelling where accessing a POP server from a Web Cafe was not possible or would have been a real pain in the but. Even when I got it back in 1999 there was a shortage of names available. Of course kris and kriserickson and kerickson were all gone, so I tried kson34 which was my university account name. The univeristy account name was autogenerated by the university as the first letter of my first name,last 3 letters of your last name, plus however many kson’s the University had had before me – so no, 34 was not my age when I got the email or the year I was born (I’m old, but not that old). However when I tried something as cryptic as kson34 as my user name the name was also already taken (this is perhaps the first time I realized how big Yahoo and the internet really were) and it came back with a bunch of suggestions - ksoncan34 was the one I took. What has always annoyed me about the Yahoo Mail was that because I took the yahoo.ca version mail sent to ksoncan34@yahoo.com does not arrive to me, it just goes into the ether (since I own the .ca version, no one can own ksoncan34@yahoo.com – maybe Marissa can fix this issue, but I doubt its high on the list of problems with Yahoo Mail).

So that is why I have a cryptic Yahoo Mail address, however it hardly explains why I have kept using that yahoo address when Yahoo Mail is so terrible. I got an invite to and had an account with Gmail since late 2004, and initially considered moving mail from yahoo to Gmail. However, 5 years of piling up people with my Yahoo address had kept me trapped in their eco-system. Plus an interesting thing began to happen, yahoo started got very scared of Gmail and finally improved Yahoo Mail. No longer was it a weekly task to delete old mail (the original Yahoo mail was limited to what is now a very laughable 10 megs of storage) as the mail size improved to 2GB (the same size the Gmail boasted they were starting with) and if got in on the Yahoo mail beta the interface was almost better than Gmail’s (if you didn’t buy into Gmail’s system of tags and archiving everything). So because my yahoo address was out there, and yahoo mail kept improving, my Gmail account was basically my spam account (Gmail used to be better than Yahoo mail at Spam, now for me, they are a little too aggressive). That changed earlier this year when as part of my switch to android, I started forwarding all my mail to Gmail and started reading mail through Gmail as non-Gmail clients on Android suck (this finally was fixed in Android 4.4) and I couldn’t take advantage of many of the Google Now features without pushing my mail through Gmail.

However I have resisted in informing anyone of this change (though as I respond to mail from Gmail that was sent to my Yahoo address this cause my Yahoo mail address to eventually get lost) since I am kind of enjoying the trailer trash chic of having an email address from the wrong side of the tracks (not that yahoo is dangerous, more like it’s a Vancouver Special. I am trying to make it the new hipster thing to rock a Yahoo address (good luck with that). Although now that Gmail is largest email provider on the planet, it hardly seems unique or techy to have a Gmail address. And so I also keep the ksoncan34 moniker in Twitter.

I also run Windows as my operating system, both at work and at home. At a time when almost all developers (at least all the ones I see at conferences and tech talks and most of the demos I see on the internet) run OSX (usually on a retina Macbook Pro) I eschew the Mac’s coolness for the suck that is Windows. It’s a bunch of things, when I was younger and spent far more on computer hardware I always stuck with windows and not OSX or Linux because games (at least the AAA titles) were unavailable except on PC. Nowadays, however, I really only play games on the console so that is no longer an excuse. Another thing has always been the cost, yes, Apple produces quality hardware which is difficult to find elsewhere, but there has always been a premium associated with it.

And although I love the underpinnings of OSX (having a true Unix shell available without having to install Cygwin or msysgit and deal with the incompatibilities there. Having a package manager (two actually), rather than the admittedly clever hack that is Chocolatey is a definite bonus. There are a few things that just drive me crazy about OSX that I can’t bring myself to use it – starting with the Finder. Even in “Windows 3.1” days Windows had a better file manager, and though I claim to be a command line person, there is a real productivity with proper tree based file management that Apple still doesn’t have, and unbelievably there are no good third party replacements for. Quite a few decisions about how things like how the Home and End keys work (though I finally found a solutions to that and other Keyboard annoyances), why would anyone want the End key to go to the End of the document, is that a frequent action for many people? And yes, as a programmer, I do want to go to the end of the line all the time! Every time I use OSX I have to deal with dozens of little quirks (that I am sure if you were a longtime Mac user seem sensible) that drive me crazy, and make it a non-starter to switch. 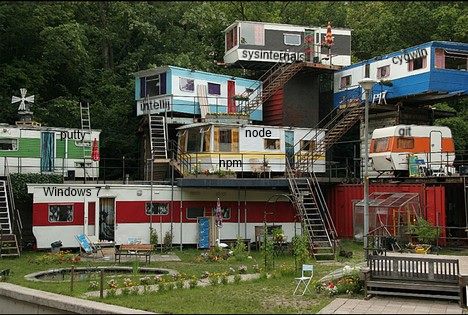 All said and done this may be the year I finally bite the bullet and switch to Linux, but for now I will run the Double Wide of operating systems and embrace the suck.