This is Part 2 in multipart series on the State of Mobile Frameworks in 2014, see Part 1 if you haven’t already.

I have built a few app’s with JQT years ago. I ended up hacking the codebase to hell to get reasonable performance on the mobile devices from the era (iPhone 3g, Droid era devices) so I became very familiar with the codebase. I haven’t built a full app with it in a couple of years, but I did play around with it before writing this review so keep that in mind when reading this article.

JQT (formerly jqTouch) is the Grandaddy of all of the HTML5 Mobile Frameworks and is almost 5 years old (a lifetime in mobile web frameworks), I guess iUI was around but jqTouch was my introduction to mobile web development. Initially jQuery plugin (remember the time when everything was a jQuery plugin?) it grew into a relatively fully functional framework over time. It was pretty actively developed in 2012, however the main work on it in 2013 seemed to be to port it to CoffeeScript (Ugh, no love of Coffeescript from me). It still has never officially reached version 1.0, and has gone through 3 maintainers, and is looking a little long in the tooth these days (especially if you download the Zip from the jQT website, rather than getting the latest version from Github.

Originally jqTouch had 2 themes, a Apple theme that looked like the iPhone’s original 2007 Apple Theme: 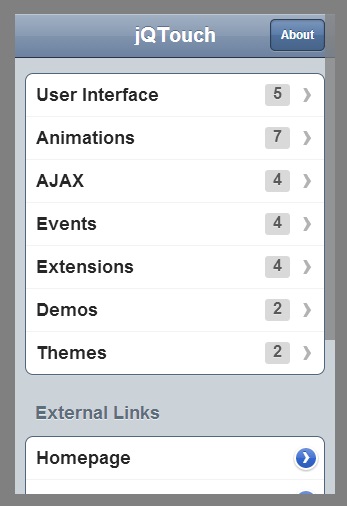 and their own theme, which looked pretty modern at the time but is pretty dated now (notice the nice faux leather stitched navbar, and the glossy buttons. If you want to overhaul the css’s look and feel (it was ported from css to sass a while ago which should make it a lot easier to change the style) and you are looking for a simple Framework there are a few plus’s to JQT. 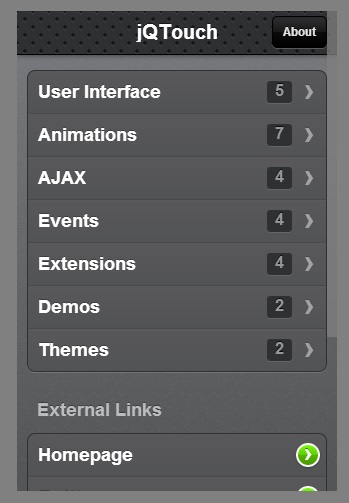 jQTouch applications are created as single web page divided (no pun intended) with DIV’s performing the role of pages (you can also load external pages rather than using DIV’s for pages). The skinning is done through a combination of CSS and Javascript with standard html elements being given classes to make them into mobile widgets. There is no proscribed MVC framework or any support of data-binding included but since the framework is so light an un-opinionated it works well with frameworks like Backbone or Knockout.

So, to sum up, I see little reason to use the antiquated JQT unless you perhaps you are working on legacy project that already uses it.

Next up, jQuery Mobile…