On March 5th Telerik released NativeScript, a new way of developing Mobile Apps aimed squarely at web developers. There have been a few other platforms that have tried to do cross platform development before, starting with Phonegap. But there are others, Titanium has been doing the Native component run by Javascript for past few years (though I have never actually used it due knowing somehow who ended up paying a fortune in Titanium licensing and reading stories like this. Then there is Xamarin which allows you to build apps on Android and IOS in C#. There are even ways of developing in Delphi if you have some crazy desire to code in the language that Andres Hejlsberg developed before writing C#. And coming soon is React Native, which will be similar to NativeScript and Titanium in that it uses Javascript as the runtime to drive Native UI controls.

I’m not going to go into how NativeScript works, or what is different from PhoneGap or the other platforms as this is explained best by Telerik themselves. You can also watch the keynote introducing NativeScript and not have to deal with dropping audio and bandwidth issues suffered if you watched it live. What I am going to do is talk about the few hours I experienced playing around with it, what I think its strengths and weaknesses are and what Telerik can do to make NativeScript one of the pre-eminent platforms to build mobile apps on.

and this for ios:

1) The styling and CSS is currently very limited. If you look at the application created in Getting Started with NativeScript and you paid attention during the Webinar you will notice that Sebastian Witalec has set his default Android font to Comic Sans and that the App he creates uses Comic Sans as the font for everything, there is currently no way I can see to change the default font.

2) Going along with the above, it looks like it is pretty hard to get things to look really polished. The best of the sample apps is the tasks app, but if you compare the mockups (found in the app/res/Design directory) with the current version of the app they clearly have a ways to go with styling: 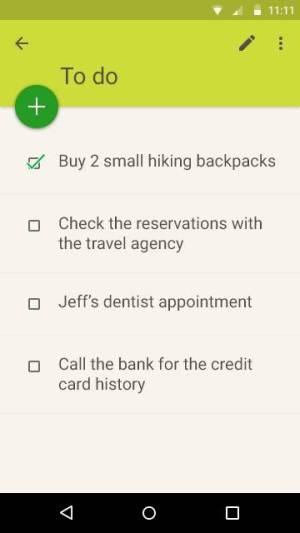 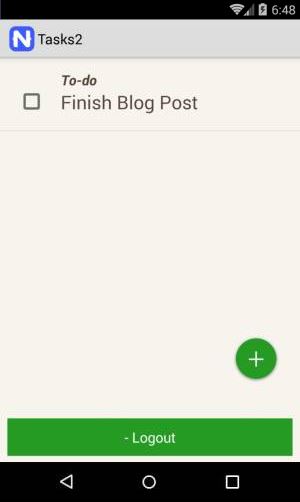 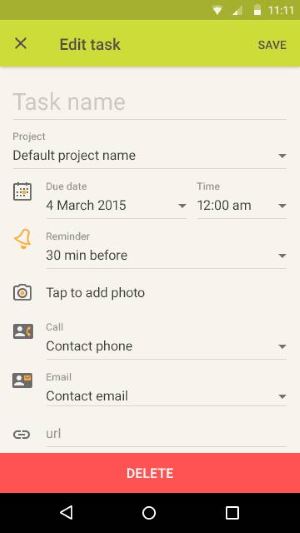 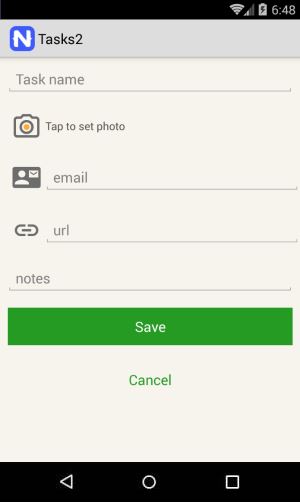 And part of the reason you want to use Native Controls is so that things look nice and modern. There is no obvious way I have seen to affect the look of the Title Bar (I am sure you can change its colour, but from scanning the documentation I have no idea how), or how to add a Menu or other control structures to the title bar.

3) I feel that Phonegap and Cordova have problem with dogfooding and I am concerned that might leak to Nativescript as well. When Phonegap was it its best, Nitobi was actively using it to develop applications for their customers. Now that Phonegap’s only real customer is PhonegapBuild there seems to be a lot less emphasis on creating a stable product and more emphasis on PhoneGapBuild and Phonegap Enterprise and Phonegap Desktop and other for pay add-ons. The fact that a bug that basically guaranteed that an IOS app would crash if you had a lot of native calls was allowed to be released and be the stable library for 4 months is kind of disheartening. Adobe needs to have at least one important mobile product based on PhoneGap or this will continue to happen. Microsoft went 5 years with WPF without having a core technology built upon it and because of that I stipulate WPF failed to gain any traction as UI platform. It had huge problems with Font Rendering and performance and Microsoft didn’t fix those problems until they built Visual Studio 2010, but by then most of developers felt that WPF was a failure. Nativescript will have the same problem unless Telerik builds an app on top of it that is core to their business. And it has to be an attractive App, with animations, and be respectful to the native platforms they are on.

4) NativeScript seems to be trying to get the holy grail of multi-platform development and this might lead to a lowest common denominator UI. ReactNative has specifically stated that they don’t see code reuse between the UI’s. This is what Xamarin has been saying from day one as well, re-use the business logic but hand code the UI for each platform. NativeScript allows you to do this, but seems to be promoting the write once run on 3 platforms, if it actually works this would be amazing but no one in my mind has managed to pull it off in Native so far (and a lot of people would argue that the problem with Hybrid apps is that they reuse UI elements and end up in the uncanny valley of apps).

What Telerik Should Do

It is very early days for NativeScript and what they have done so far is very impressive. Although I don’t think I would plan a serious App around NativeScript yet, I do look forward to version 1.0 and upcoming improvements to the platform. They managed to get this out before ReactNative was released, and they should charge ahead with their lead since ReactNative will get a ton of publicity and scrutiny when it comes out. But Facebook is dogfooding the app, and apps they have created using ReactNative look awesome. Since they are both going to open source it will be interesting to see if they can incorporate elements from each other and the whole Javascript Native thing can explode and improve!