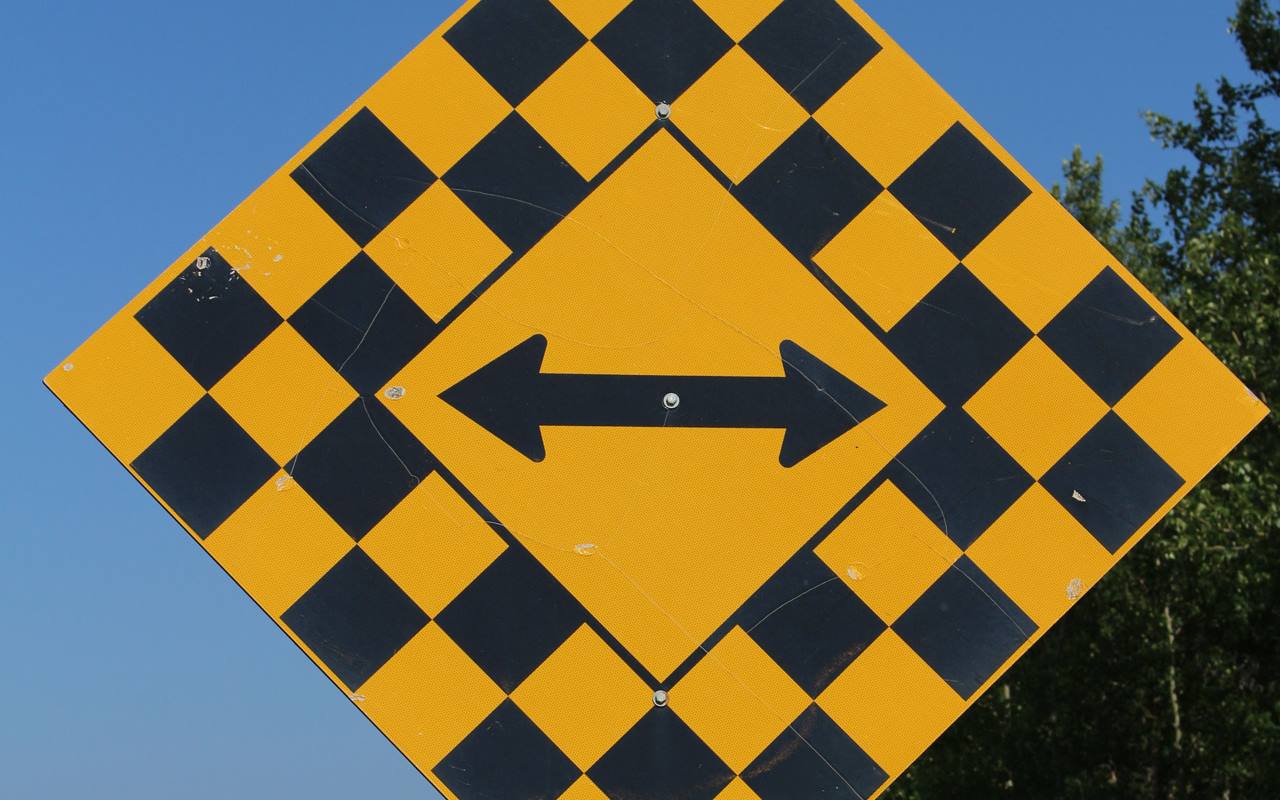 The number one question I get asked, both by as a consultant and in the emails I get from readers of this blog is

“Should I use Phonegap or write a native app”

Side note: when asked this question people almost always refer to Cordova as Phonegap, however I usually refer to it as Cordova as that is the name of the Open Source project, rather than PhoneGap which is the Adobe branded distribution of Cordova

And my answer is always: it depends. For us pragmatists it is a similar question to “What is the best programming language?” And it depends on even more than the type of App you are planning on creating, it depends on where you want that app to go, what features the app requires, what development talent you have available to you, what platforms you want to target, and the list goes on.

When I am asked if you can build it in Cordova, the answer 90% of the time is yes, you can build it Cordova.
However, sometimes, building certain types of Apps in Cordova would require so much work will be spent on plugins and optimizing the HTML that it may not necessarily the most optimal choice of a platform.

Initially I had sketched out a flowchart that gave some guidance as to whether or not you should develop a native app or a hybrid/Cordova app, however it oversimplified things and did not properly factor a great many things into the decision.

My new answer is more like the classic decision tool where you write down the plus and minuses of each aspect of a decision, except I recommend you create two columns (Native and Cordova )and give points to either Native or Cordova depending upon the answers to following questions. You may decide to change the weights I have awarded to each question, and I may have missed several factors that may affect the decision, please feel free to make suggestions in the comments below.

Number of Platforms to Support

If you are making a game that has any level of sophisticated graphical requirements, award 5 points to Native. You can do graphics, and you can certainly make puzzle style games in HTML and Javascript, but if you want to squeeze everything out of a mobile device you really want to get as close to the metal as possible and that generally means coding in C. This may be changing as the old Android Browser is becoming a thing off the past, the old Android browser was removed in Android KitKat 4.4.3 and replaced with the Chrome view, however it wasn’t until Lollipop (5.0) that it became an evergreen (i.e. always updating) browser.

There are two philosophies when designing mobile apps, one is to make the App look like they completely belong on the platform. Follow the platform design guidelines as closely as possible so that users familiar with ecosystem will feel as comfortable as possible in the application. Use the conventions of the platform to easily expose functionality, hoping the user will intuit how to use your app because they know the platform. Gmail is a good example of this, where Gmail on iOS looks like an iOS app and Gmail on Android looks like an Android App: 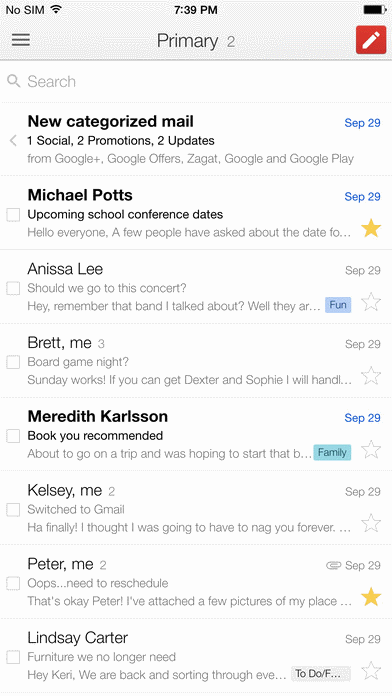 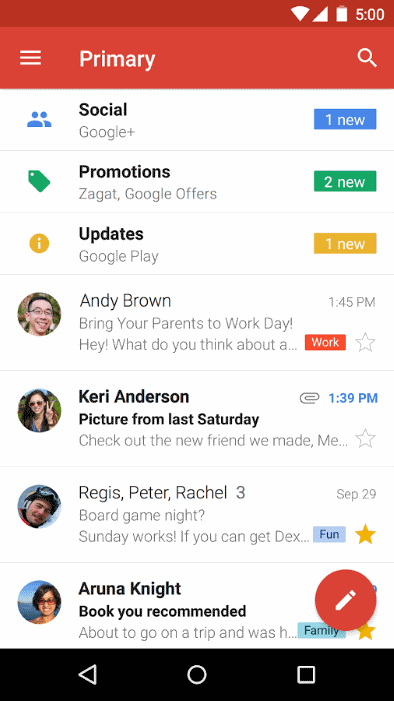 If you app falls into this category, where you want to follow the platforms design guidelines and functionality as much as possible, award 5 points to Native.

Then there is the design philosophy that our App is our own. We should have a common look and feel across platforms for our App, and that our brand and our app is more important than the platform we are running on. Instagram is a good example of this: 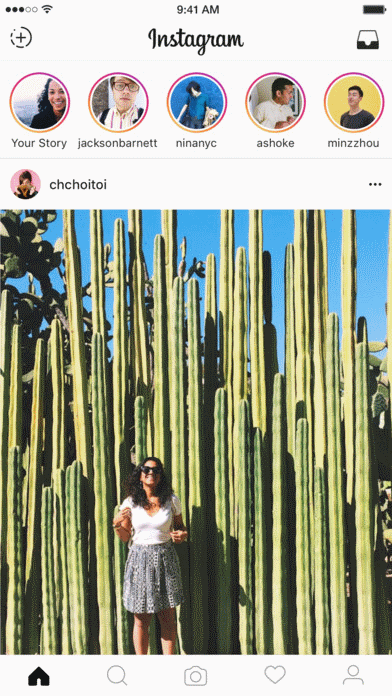 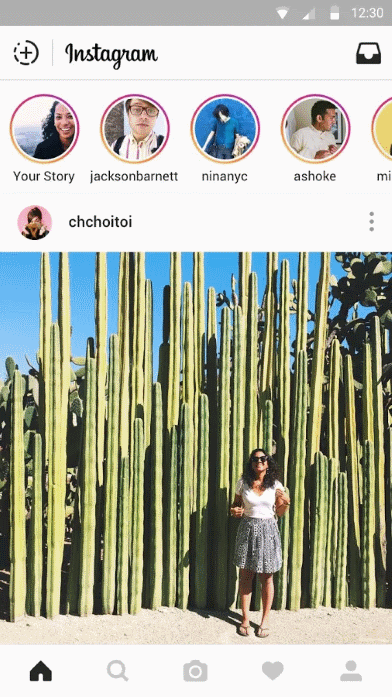 If you want your app to not mimic the features of the underlying OS, and have its own look and feel, award 3 points to Cordova.

Everyone needs everything fast, but from experience I believe that you can create Cordova app faster than a native App, in the end the maintenance will probably similar (and long term developers know that most of the lifecycle of a long-term successful app is maintenance) but it will be faster to develop a Cordova app (even if it is only for one platform, double true if it is for multiple platforms) than Native Apps. Add 3 points to Cordova if speed of initial delivery is more important than the upkeep up the application.

As a reader of this blog, you probably know what Cordova does best, and you probably know all of the built in features that it has available to it (battery, camera, content-sync, dialogs, file, in-app-browser, media, vibration, network). These plugins are all pretty battle tested and reliable (though not 100% reliable), however as soon as you need other functionality you may want to start removing points from Cordova. If there is a popular plugin available you may be in luck, but look at the plugin very carefully. Here are some things to look for:

1) Is it frequently updated, though this is not 100% guaranteed to be show stopper, the plugin may be perfect and just “work”, it is rare that mobile plugin will not have to be updated. Apple deprecates functions all the time (just look at the “official” plugins when you compile in XCode or Android studio and see how many deprecation warnings there are), and if a plugin has been abandoned you may be taking on more work than you bargained for. Frequently plugins are written for apps and then when the app gets abandoned, so does the plugin. It may work perfectly, or may just need some fixes, or may take weeks of your time getting it to work.

4) Is there decent documentation and preferably an example app for the plugin (check to make sure the example isn’t the default cordova app, this has happened to me a couple of times when I thought there was a sample app and it just turned out to be Hello Cordova).

5) See if you can make your own quick and dirty sample app that does what you need it to do, and run it on all the platforms you are going to run on. Obviously for something like In App Purchase that might be a little too much work for preliminary research (though I can attest to how well that particular plugin works, it’s awesome), but if it is something like a barcode scanner, make sure it functions like you expect.

6) Check StackOverflow and see if there are lingering issues with said Plugin.

7) Ask on the Slack Channels if anyone has used the plugin, and what their experiences were.

If everything checks out, and you either don’t need plugins, or the plugins work great give Cordova +5 points, otherwise +5 to Native. If you discover that it is something that you simply currently can’t do on Cordova, then really short-circuit this whole process and go direct to Native. If you are going to be using plugins that may require some care and attention, or you are going to be writing your own plugins, make sure you have access to developers who are comfortable in all the platforms you will be developing for. Debugging plugins requires a fairly good understanding of the underlying platform.

Lots of mobile apps have to communicate backend servers to be functional. Most modern services support various REST protocols but sometimes you have to communicate with servers in older binary (like ISO 8583), or XML protocols (like Soap or EBX). Maybe you have to work with a particularly complicated remote API where there are libraries in Java and C (or something that iOS can work with) but not in Javascript. If that is the case, then award 5 points to native. If it either a JSON Rest API or posting to a website and having to parse the results in HTML, Javascript potentially with the help of jQuery or another Javascript library is going to be easier, award 3 points to Cordova.

A lot of hay was made about ReactNative’s ability to update without going the App Store, and with multiple [plugins] (https://github.com/nordnet/cordova-hot-code-push), including one from Microsoft, or with the hydration feature from PhoneGap build you can do the same thing with Cordova. In the past, the week to two week updates times of the iOS App Store made this a truly compelling feature, however with Apple’s new push to shorten approval times to just one day that becomes a less appealing feature of Cordova. However, if you want really want to do Continuous Deployment, or you are concerned that Apple will not be maintaining there speedy approval times in the future, chalk a couple of extra points up for the Cordova side.

Even if you end up ignoring the final tally (you may find after doing all the research required to come up with a number for Cordova or Native that you have already decided on one direction or another) thinking about and researching each of these methods will give you a feel on the way to go. Be pragmatic and patient, realize where the advantages of the various methodologies lie and in the end, choose wisely. You will, if you have a successful product, have to live with your decision for quite a while.