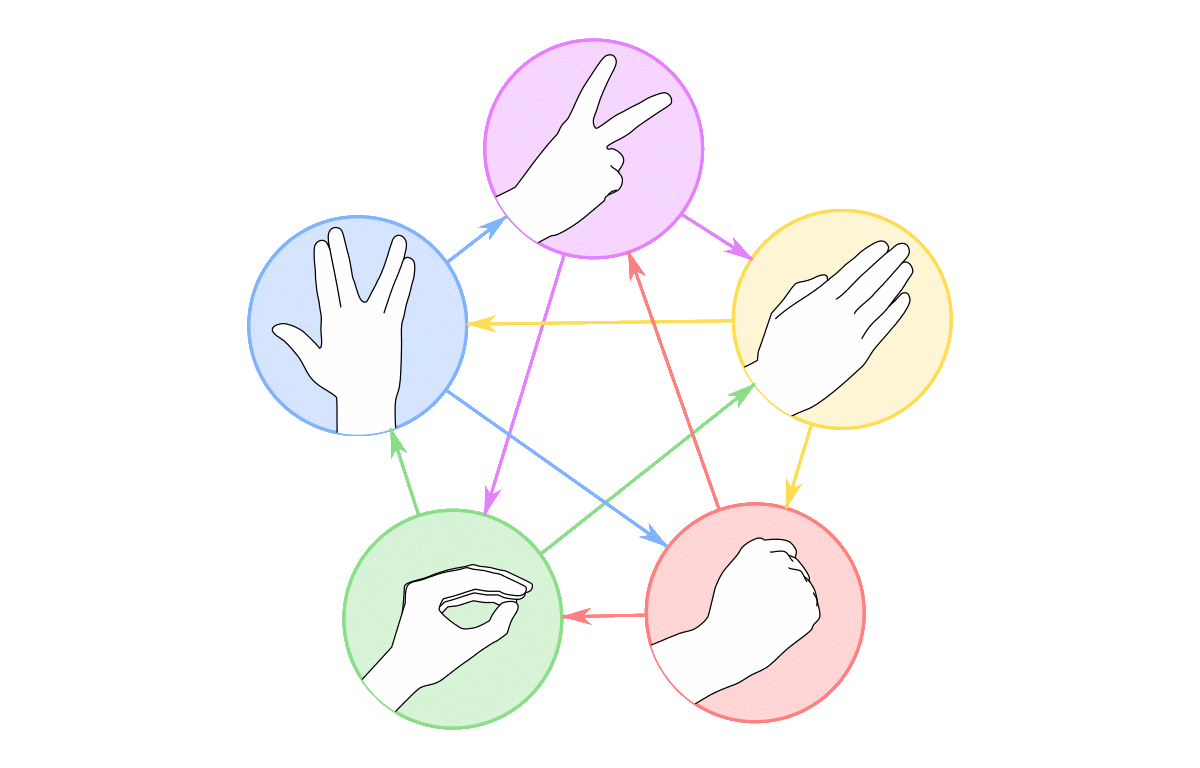 In the previous article, Creating A Google Home App I detailed how to get a very simple Google Home App up and running. Mostly it was about setting up the node project, the Google Actions project, but in the end you had an App that when you talked to it, it would say – ‘Hey Ma, It Worked!’. And while it wasn’t much of an achievement, but I know I felt pretty cool when I got my Google Speaker in my kitchen saying things I wanted it to say.
Somehow it felt more impressive that just having a website that dumped out HTML, and now in this article we are going to learn how to actually create something (somewhat) useful, and learn a fair bit more about the GoogleActionSDK.

A couple of quick notes before we jump into the application, because we are handling all of the parsing of text (Google handles the Text to Speech for us, and does a very impressive job of that), this does not create the cleanest possible code as we are stuck using default intents. If you want to have a cleaner set of intents to map to, and not have to manually parse responses you might want to look at WebHooks in DialogFlow, this is not that tutorial however.

Another note, I have been messing around with Google Actions Console for a while, and sometimes it is just buggy. I’ve had to delete projects and create fresh projects to get things to work, hence I would recommend not filling out App Information section of the Overview until you are ready to go for two reasons.

Also, a quite note: Google For Business accounts seem to work, until they don’t.
I spent over an hour trying to figure out why the app would stop sending requests after the first one.
Finally after a lot of googling, I saw someone post about how they were having a similar problem until they blew away their app and recreated it on a gmail account (rather than a Google for Business Account) and all my problems went away – you have been warned, not all Google Accounts are equal (and surprisingly the ones you pay for are less equal), or it could be the act of creating a new project fixed things, as I have said a couple of times sometimes the only way to fix a project is to create a new one.

Changes to the index.js file

The index.js file is not going to change a lot, basically we are going to do all of the heavy lifting in a file called rpsls.js, so in the index file add a const reference to those exported functions before we create the expressApp.

You can remove the entire mainIntentHandler function from index.js (it is going to be expanded, improved in rpsls.js). And then we have to update our actionMap a little.

Ok, so we have two new standard Intents that we have added. And that is all the changes we need to make to index.js.

Lets quickly go over what we have done. We’ve removed our old main handler and added one that we are going to add to the rpsls.js file. We have also added two new handlers that are used when the user enters responses to our asks.

The OPTION standard intent handles lists (and carousels, but since we are mainly focused on Google Home, we are going use the simple list for our demo).

The TEXT standard intent gives us raw text to parse, which allows the user to text free form (thus be prepared to handle anything).

Create a new file in the main directory called rpsls.js. It is going to have three exported functions, so lets create those first (this will enable us to run the app even though it isn’t complete because all the pieces will at least be in place).

Just like our mainIntentHandler in previous version, all intents that are mapped from the main SDK get an instance of the actionSDKApp object passed to them. This is used for many things, and is pretty well documented at https://developers.google.com/actions/reference/nodejs/ActionsSdkApp, and https://developers.google.com/actions/reference/nodejs/AssistantApp – it is important to note that ActionsSdkApp is a subclass of the AssistantApp. The first thing we are going to do welcome our user and give them the option to either get instructions for Rock, Paper, Scissors, Lizard, Spock or play the game. We could do this with text parsing, but since there are only two possible options this seems like the perfect place to ask for a list. So lets update our mainIntentHandler:

The askWithList method, takes an InputPrompt and a list. The buildInputPrompt takes an option (whether or not the text is SSML), some text (either SSML or plain text), and a list of messages that can be output if the user fails to enter any text. If you want the ability to properly read things fractions, numbers, and have more control of the timing of the speech I would recommend producing your text in SSML. Our SSML is very simple here, we create a single paragraph (<p>), in which we have three sentences (<s>).

OK, now that we have a slightly better opening for application, lets make sure it worked. The first thing we have to do is restart the app

If there are no errors, then fire up ngrok, if ngrok is already running with the same url as last time, skip this step and the following 2 steps.

Next we need to change the url for our conversation in in rpsls.json.

And finally we have to update gactions:

Go to the gactions console and test the app: 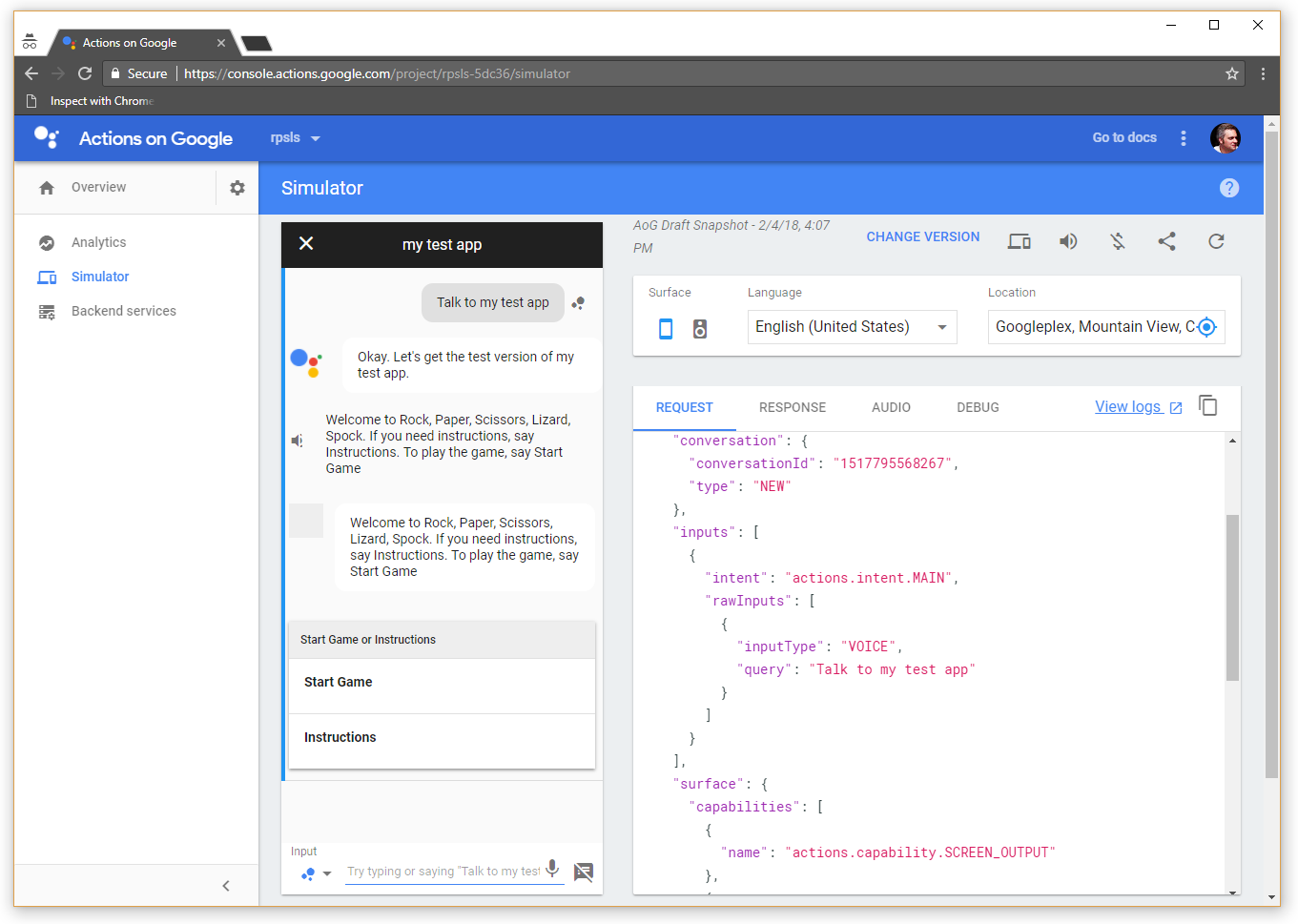 Note, if you are getting “My Test App Is Not Responding Right Now”, try going to the Overview, and click on “Test Draft”

Of course, nothing else will work, so lets parse the response we are going to get. This is handled by the actionApp.StandardIntents.OPTION, that we saw earlier.

The option intent handler is also rather simple, the key thing is that to get text from an option, we use the getSelectedOption method. This method will give us back the exact string we used as the key when we built the list (even if the user types in ‘start game’ we will get back ‘Start Game’). In fact, since we need the exact string, lets replace all the string instances with constants. At the top of the rpsls.js lets add the following constants:

and lets fix the main intent, by replacing the list with said options:

and clean up the optionIntentHandler:

We will be using OPTION_AGAIN and OPTION_END when the game is over, so you can ignore those for now. What happens when the Google Home user responds with something that is not in the list? Instead of firing the list intent handler, the app fires the text intent handler, which we will see later in this tutorial, so we will handle invalid choices in that portion of code.

Reading the instructions is similar to our main intent, we create the same list (eventually we can factor out this duplicated code and turn creating a list into a function), and give the user the instructions in an input prompt. To have the speech sound more natural I have added short breaks after each instruction sentence. The break can be inside or outside the sentence, quoting from the W3C recommendation:

Once we done, you should feel free to play with elements like prosody, say-as, emphasis, phoneme, and even the audio tag to become comfortable with SSML.

To code in the startGame function, add

When starting a game, we aren’t asking for a list anymore, we are asking for a text input (the difference between askWithList and ask is that the response to an ask fires the actionApp.StandardIntents.TEXT intent). While we easily could have used a list here (there are only 5 possible answers), I did want to demonstrate the difference between handling a list and handling a text response, plus our option handler would have gotten pretty big.

Like the option intent handler, the text intent handler is pretty simple. We grab the rawInput from the app, then we are going to make sure we have valid input (being a rock, paper, scissors, lizard or spock) and pass that on to main game engine (returnResults).

Currently we are not keeping track of any state, and we will wait until the next article to start maintaining state, so we don’t know here if the user has actually started the game or whether this was an invalid answer to the initial question of play game or instructions. If the user had chosen an invalid list item (not start game or instructions) they are going to get a nonsensical answer but, like I said, we will fix that in the next article. Also note that we are not controlling the input in the same way as we do with askWithList so we force our input to lower case for parsing.

The returnResults game engine is overly long (we will improve it in the next article), but simple piece of code that randomly generates a choice of Rock, Paper, Scissors, Lizard or Spock and tells the user if they have won or not. It plays fairly, though there should probably be some added weight to throwing Rock or Spock more often. At the top of the rpsls.js file, add the following constant:

Next add the returnResults function.

It’s long code, but it is simple code and was written for ease of readability, not for elegance (we will convert it into a tighter array based engine next article). There isn’t anything new here, we determine the winner, build a list of whether we want to play again or end. Inform the user of whether they won or lost.

Now that everything is done, lets start up the simulator again. 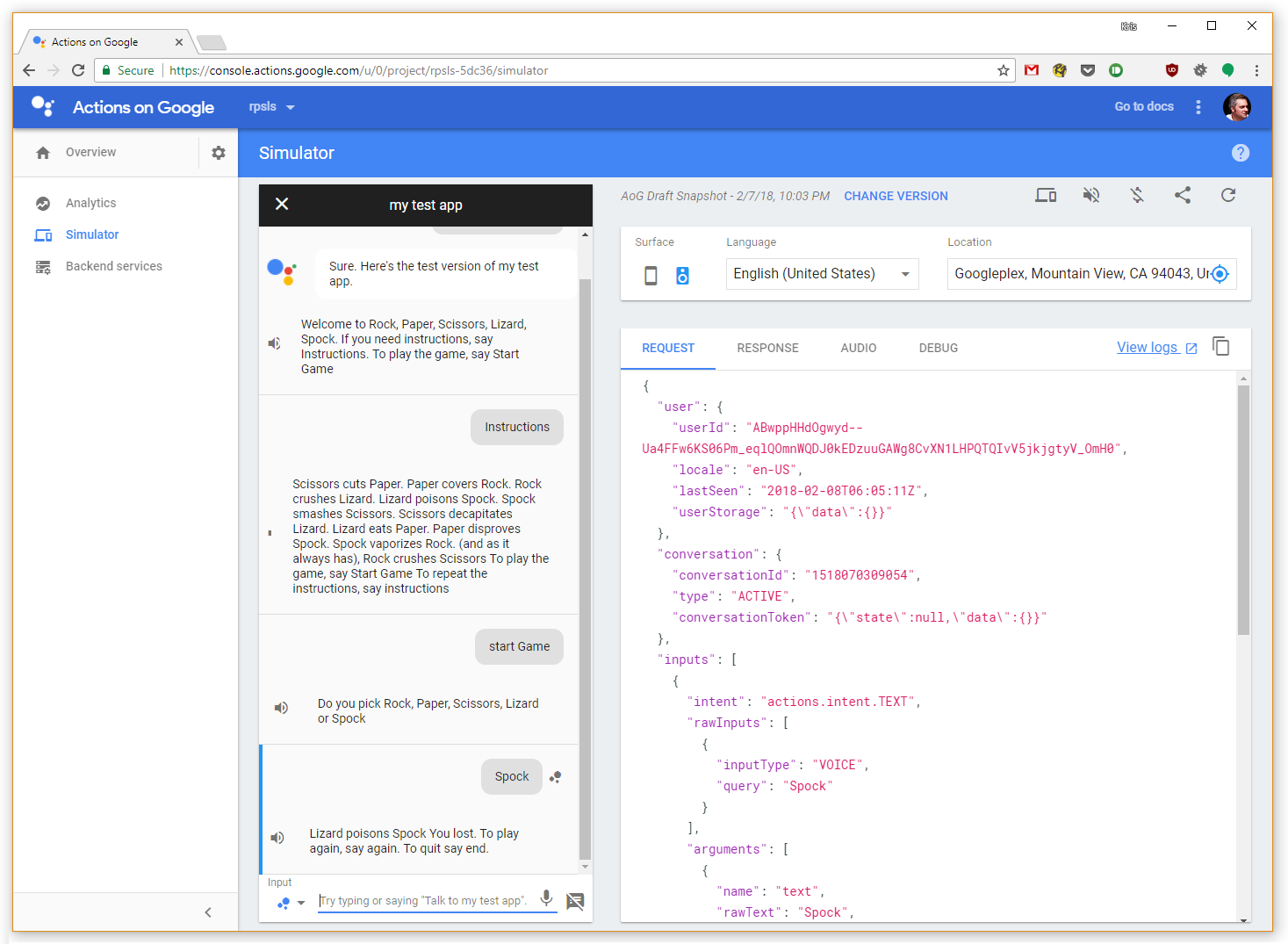 Now that it is working in the simulator, try it on your Google Home device. Also play around with SSML, and the various inflections to improve the feel of our little game.

If you want to download the code for the state that it is in, it is TAG PART_2_STEP_1 on GitHub: https://github.com/kriserickson/google-actions-rpsls/tree/PART_2_STEP_1.

Next article we will start keeping score, add a login to our app, add account linking, and finish off some of the rough edges in the app.

As always, if you see any bugs, or have suggestions feel free to do so either in the comments below, or as an issue or pull request in the GitHub repo.