I bought a Nexus 4 at the end of August when they dropped to $199. My iPhone 4 was barely holding on and I had grown frustrated with Apple’s walled garden for the past few years. A month later even though I quite liked the Nexus 4 I upgraded to the Nexus 5, here are my thoughts on that switch:

The iPhone was amazing when it came out, truly amazing. It had a almost a five year lead on the competition, however it seemed like because of the initial work done, IOS upgrades were very incremental (at least until IOS 7). From the beginning Apple was very tied to its walled garden (or benevolent caretaker) approach, in that you were stuck Apple’s poorer quality apps. It has kind of amazed me that although Apple apps where initially best of breed, Google and other companies had been creating the best Apps on IOS for a while, and those Apps were hobbled because there was no way of setting them as the default handler for basic things like Mail, Maps, and Web Browsing. I probably would have stuck with IOS if they had changed that one thing in IOS7, the ability to register other Apps as the default app. In my last couple of years on IOS I had switched to Google Maps as my default Maps, Chrome as my default browser, (I still used the Mail app because it was still superior to everything else out there). Every time I clicked on a link that opened up Safari or the Apple maps and I had to copy the url or location and re-open it in my environment of choice made the switch more inevitable.

And then there was the Nexus 7, the cheap little tablet that convinced me that Android was not as bad as I remembered from the 2.3 Gingerbread era. There were slowly starting to be quality apps made for Android, and some apps on Android were even better than the equivalent on IOS. I truly believe that the Nexus 7 and a couple of other inexpensive quality tablets were the reason that a lot of technical people realized that Android was finally getting to a point where it was as polished as IOS and that the state of Apps was really improving.

***Digression*** It's not the number of Apps that are on a platform, it's having the apps that you need/want and the quality of those apps. There are almost 150,000 apps in the Windows 8 store and when I first started using Windows 8 I literally could not find one that I wanted to use. I really wanted to try the Windows 8 experience and I downloaded apps that I had been told where of excellent quality and I never used any of them more than 1 minute of trying them out. Netflix and Kindle were actually better in a browser, and the rest of the apps I tried had no compelling to use them. The number of Apps available on a platform is a canard (that thankfully is is going away) up there with the mghz wars of the late nineties.

And so after deciding to switch to Android in August, and switching in September here are my thoughts. To make it simple for you I have created a simple flow chart on how to buy a phone (oh and if you switch as well, read Eric Schmidt’s Google+ post on how to switch from IOS to Android 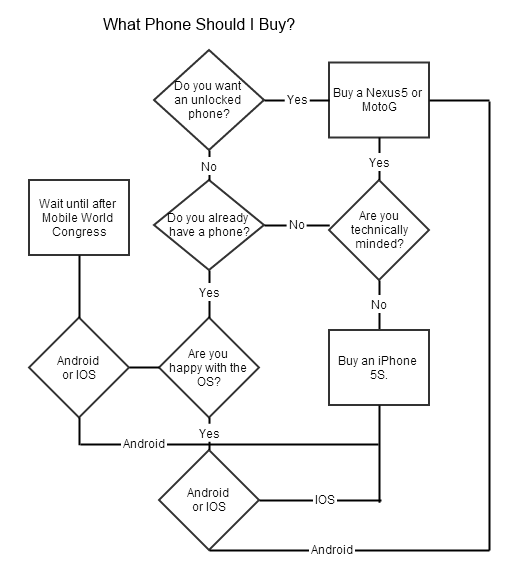