It’s been 6 months since I wrote First Thoughts on NativeScript and you would think by now with my formidable blogging output I would have written dozens of articles following up on my initial thoughts. Well, as they say the best laid plans of mice and men, but I finally spent several hours with the latest build NativeScript build (NativeScript 1.3) and I thought I would pass on my thoughts of how NativeScript progressing and my ongoing thoughts of NativeScript, React Native, Titanium, TabrisJs and what I am now dubbing the “MobileNativeJavaScript” movement (I know the MNJS name is going to catch on and rock the world!)

First off, updating NativeScript was a lot more painful than originally installing it. Perhaps this was because when I last installed NativeScript it was before the great io.js - node.js merge - where NodeJs version 0.10 was still the defacto standard and node-gyp (the node build tool for compiling c extensions) was a little more reliable. I understand that there are lot of moving parts in the node world, npm is run by one company (and where the stable versions switched from 1.4.x to 3.3.5 in under a year), node is being run by a Foundation (the stable versions of NodeKs in the past year have been 0.10.x, 0.12.x, and then 4.x) and node-gyp relies upon Visual Studio in Windows and the XCode Command Line tools on OSX. The possible number of combinations to debug the instllation and building of NativeScript is pretty large, but other complex projects (Cordova don’t seem to have the same problems that NativeScript has, I failed installing it on 5 different boxes (two Macs and three windows machines, with different versions of node and npm). 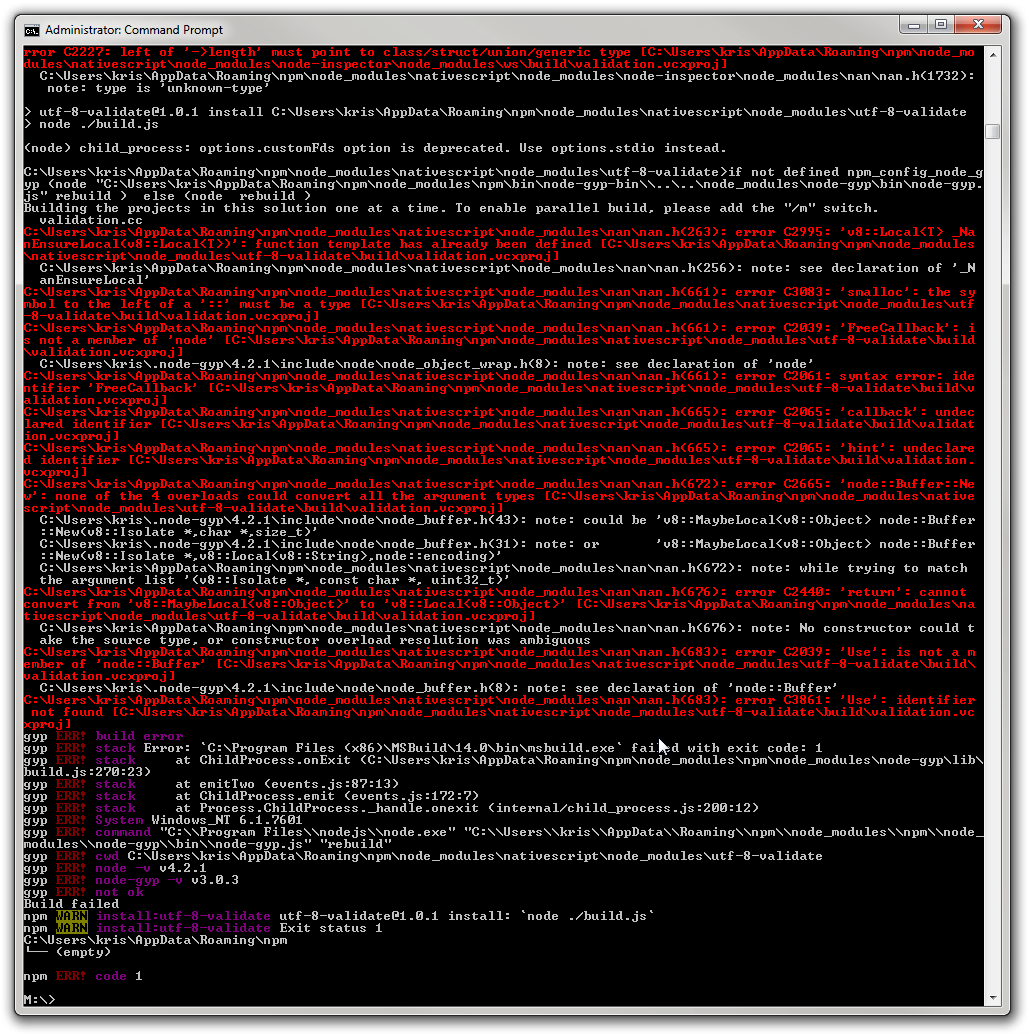 Eventually the only way I could get it to install was creating a clean VM and installing it there. And I spent some time playing around with the new features: new CSS properties, plugins, and animations.

First of all, one of the complaints I had in the my first review was that it was difficult to style things, and I am happy to report that has been fixed. It may seem minor, but one of the ways to not have your app look like it was put together in two minutes is to not have every part of it look the same. While the css is much better, it is not as extensive (obviously) as CSS in HTML and missing a lot of what we are used to in HTML5 but they have provided a lot more to work with now for styling your app.

The plugins are a welcome addition as well. The out of the box functionality of NativeScript is pretty limited: you get Location, Camera, 20 UI Widgets, 5 Layouts, 5 Dialogs and not much else. One of the features I liked when it shipped was that you could call any native API that you wanted in Javascript. Unfortunately that required that you be familiar with Android and iOS APIs and be comfortable enough with NativeScript to be able to convert it to Javascript. So when you wanted to be able to, say, get the version of the App, you would have to know that the code to get it in Android is:

And know that you would have to convert it to the following Nativescript:

Now you just need to include the nativescript-appversion, and you by installing the plugin you get the iOS version as well. There are 30 odd plugins listed (25 cross platform) on the NativeScript Plugins gallery, and some are as simple as getting the app version, to some that are a little more full featured like the NativeScript-Grid-View. A majority are a couple of lines or less for each platform, yet all are welcome as not only do they make things easier for you they serve as good documentation on how to integrate with the Native Platforms.

Animation is very important in mobile apps, it is so important that in Google’s excellent design spec on Material Design, the first section after “What is material” is the section on animation. It gives clues to the user on what is happening when they interact with the app, and gives clues on what to do next. It can delight the user, or frustrate them if the animation is slow, awkward, or poorly done. NativeScript’s animation will seem mostly familiar if you have used jQuery animate. You can animate 5 properties (opacity, backgroundColor, position, scale, and rotation) with a duration, a delay and an iteration. The one thing missing from the animation is an easing, they have added what they call a “curve” which has to be class specific to the OS (either TimeInterpolator for Android or UIAnimationCurve for iOS). Which means that if you wish to support both devices you have add code like this:

and try to find roughly equivalent classes to do your easing. Why they couldn’t have abstracted easing is a bit of a mystery, maybe it is a feature coming in the future.

After spending hours getting NativeScript installed, I set out to try to rough out an app (I was going to create a quick clone of my Recipe Folder app, since it is written in Javascript I thought it might be pretty easy, I could at least get the first page up and running in a few hours and maybe I could reuse some of the code. 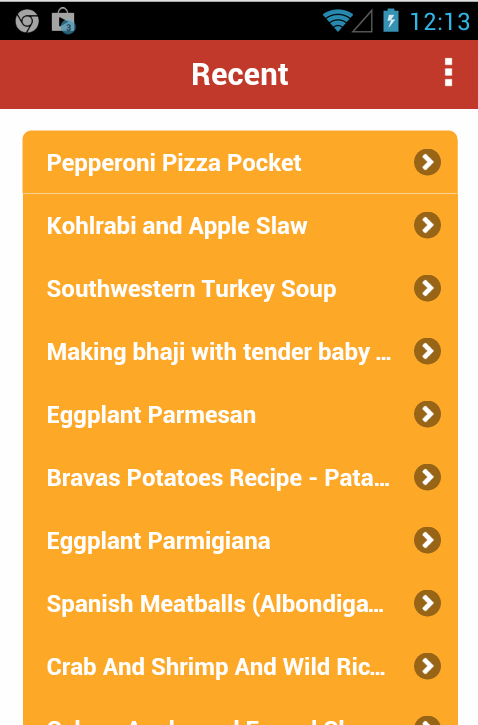 And it was pretty easy to get the Javascript going to get a list of recipes, however I found it was basically impossible to style the listview. As much as I played with the somewhat foreign widget set XML I couldn’t get it to look anything like what I wanted. Creating a simple list, was easy, styling said list was very hard (I don’t know if it is impossible, but I gave up after a couple of hours). The next thing I wanted to add was a menu in the upper left corner to match the menu. I found now way to add a menu in NativeScript, there is a side-drawer menu that only works in iOS but there appears to be no way to create a drop down menu. Next I wanted to color the ActionBar, but apparently that is still not possible yet either. So basically I had an ugly list of recipes, OK, maybe then I will get to the recipe view part. So I added an event to go to view the recipe. Below is the page I wanted to duplicate: 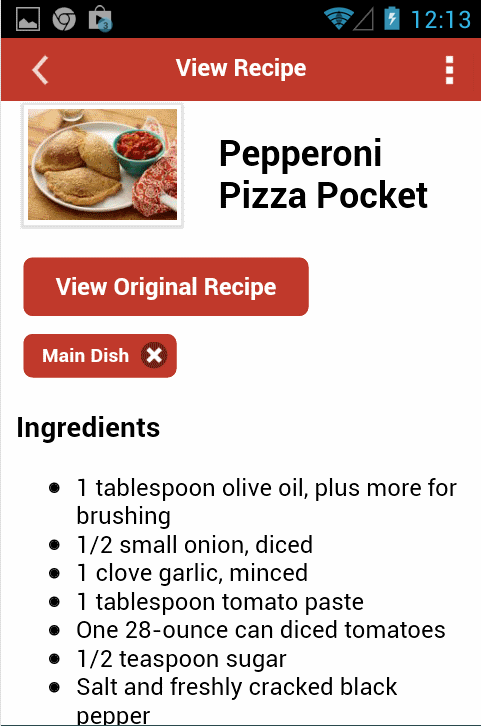 The GridLayout was working pretty well to create my view, and things were going swimmingly until I wanted to add a button that had an image on the right (the x that allows the user to remove tags form the recipes). And then I tried to get styling going for the Ingredients and Directions and realized that the lack of an HTML widget was a bit of a killer. I spent 6 hours trying to get something demoable out, and failed miserably. I was left with an app I wouldn’t show to anyone. In short I was frustrated with the appearance of the app, it looked juvenile and unprofessional and I couldn’t see an easy way to fix even I spent hours more working on the app. It was at this point I abandoned the effort and that will probably be my last experience with NativeScript and probably my last experience with the MobileNativeJavaScript.

Trying to convince myself that I was just not comfortable or familiar enough with NativeScript I downloaded and built all the sample apps, they all look terrible. The best looking app Friends (see below), still has an unstyled title bar: 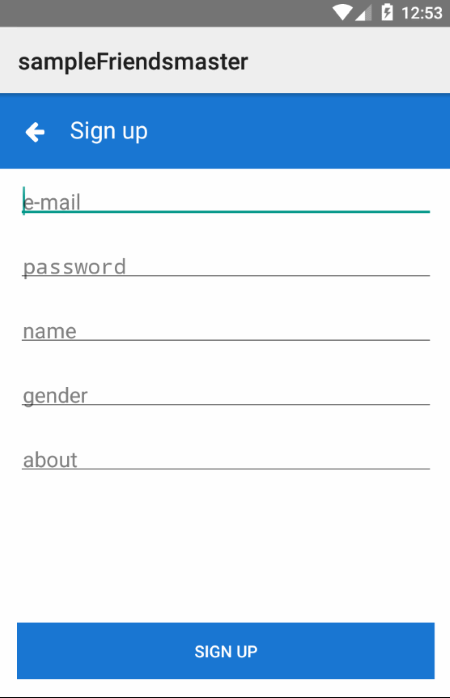 Sure they are sample apps, but, their App Showcase has 4 apps. Three of them are pretty ugly sample apps, only one is available in the AppStore – and it crashes on my phone: 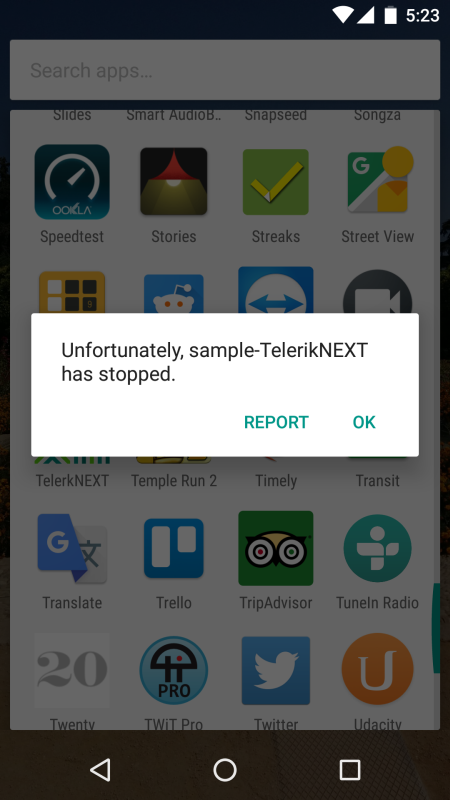 and the rest are pretty feature barren. Has no one in the six months that this has been a product released an app that they can point to in one of the app stores to brag about? The number one recommendation I gave in my last article was to dogfood this framework, and it is pretty clear that no-one is building real apps with it.

NativeScript, ReactNative, Tabris, Appcelerator and all of the MobileNativeJavaScript frameworks seem to have too much downside for the small upside of being able to write in Javascript and create apps on multiple platforms (which hybrid apps do already).
I truly believe that the “performance” of hybrid apps is a MacGuffin, and it is not said performance of hybrid apps that are the why people under value them. Rather it is the fact that really good modern apps are becoming more and more platform dependent, using the best features of the platform and that is what you are missing by going hybrid. You lose all the animations and UI that come with frameworks and because of that hybrid apps appear to look and feel a little last year. It is not the fact that they are less performant but this dated and non-native feel that is the issue with hybrid apps. So either you accept that (heck the Facebook app looks and feels terrible to me, and it is native) and try to create a unique feel and look for your app in HTML5 (and use all the power and features of HTML5, including the powerful animations and graphics that is possible in HTML), or go native to create the best possible app on each platform. None of which can be easily achieved by these MobileNativeJavaScript platforms.